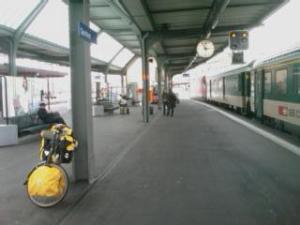 So, why does one do/why am I doing (speak from the I, Brayne!) this journey? In my Dad's words, why on earth would I want to do such a thing.

(Noting as I write on a train from Geneva to Berne, shortly after taking the above picture at Geneva railway station, that I have been resting easy, warm and dry with the lovely Bob and Doodie Evans these past three days, partly to get through and over a foul cold, partly because the weather around Geneva has been utterly miserable, three days of constant, soaking rain. I may be incorrigible, but a masochist I ain't…)

Put at its most simply, if I were on my death bed thinking back over the things I wish I had done, but didn't, doing a mega bike trip – ideally from Beijing to Kathmandu through Lhasa – would have been right at the top of the list.

Cycling a long long way, without having to worry about the (of course legitimate) needs of a partner on the back of the tandem or about a salaried job to come back to is a dream I've had for decades – and most clearly since encountering a determined lone cycle-borne Brit atop the Khunjerab Pass crossing from Chinese Xinjiang into Pakistan in 1986.

Doing the big Asian trip would be a bit of a stretch as a starter, so Europe was right behind there, and that has to do with Gestalts.

An open Gestalt, put simply, is unfinished psychological and emotional business. The East European revolutions of 1989 turned my life around in all kinds of ways, just as they ended the divisions of the Cold War. Along with Europe itself, I found myself propelled on a midlife journey of healing and of deeper meaning.

That led to psychotherapy, as client then as practitioner, to redefining myself professionally and to engaging with journalism from the perspective of the reporter's personal and emotional experience.

It all also led led slowly and rather painfully to the end of a marriage, but also to new, challenging but deeply fulfilling relationships, including with my children, with friends and especially at home with Sue.

(Good grief – as I pen these lines, a crowd of young Swiss national service soldiers have just climbed on the train in full battle gear and with semi-automatic rifles! They do indeed take self-defence seriously here.)

Back to the narrative, at the transition between full-on career and what I hope wil be a fit and productive Third Age, this is the time to fulfil those old dreams and close some of the bigger Gestalts that remain open.

Put even more simply, when I've been asked in French these past three weeks what I'm up to, I just say, c'est une chose a fair avant de mourir. Everyone understands.

As I've written before, I also, sadly, believe that things look very grim indeed on the global warming and global economy front, and that quite soon it is going to get a lot worse.

In just a few years time, I anticipate that our collective human focus will need to be much more than it is now on actual survival than on having personal fun. So, selfishly-seen, cycle and travel now while stocks last – and while the knees are still able to do this kind of thing.

My friend Mary Self put it wisely in an email earlier this week.

"Most explorers are male and maybe the practical problem solvers are more inclined to make a physical journey than we females.

"Life is a journey of discovery" writes Mary, " and I suppose we can act that out ritually or symbolically. The idea of physically journeying to a destination alone and to find deeper meaning is perhaps an outer symbol of what we are doing inwardly – toiling and striving to glimpse and understand ourselves and others dear to us."

Expressed at its very simplest, when I watch eagles playing in the updrafts of the Alpine foothills or listen to the tap-tap-tap of last autumn's dry leaves as they skitter along the road beside me in the cycling silence of a gentle tailwind, then I know that this is the right thing to be doing.