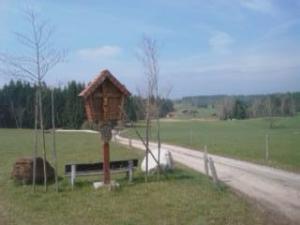 After spending an hour this morning re-posting my Serious Wistful Thoughts from yesterday, which Blogger.Com had got all confused, I'm going to try one post today with three pix, and then a separate one just with pix, but text will refer to both.

Make sense? If yes, then read on.

After yesterday's thoughts about the suffering Christ at the Wieskirche, I suddenly clocked the symbolism today – cycling 70 miles east in a more or less straight line in and out of the Alpine foothills – of the cruxifixes one sees all over Bavaria by the road- or path-side.

I've been following, as a good law-abiding cyclo-Burgher, The Official Route, which has slowed me up enormously as it's taken me up hill, down dale and along miles of unmade-up forest track.

But the views of the Alps looming through the morning mist were breathtaking, and studded every few hundred yards with these peasant carvings of Christ on the cross, with always, almost, one tree either side.

I should have noted what the trees are, some old and some newly-planted as you'll see in the pix. But the symbolism has to be that of the two robbers at Christ's side at Calgary. Repent even at the last minute, and heaven is yours.

It's rather touching, to realise how seriously the local peasantry here in Bavaria, on what is now again the Jakobsweg/Camino de Santiago (see Further Official Signs in the second batch of pix) at least used to believe in the literal truth of the Bible.

Be a good Catholic, say your catechisms and nurture your churches and roadside crosses, and you're headed up to join the saints in those etheral scenes yesterday at the Wies. Sin, or spurn the church's teachings, and you're toast.

I wonder how seriously the Bavarians still believe. My verger at the Wies lamented how churches here too are now emptying as people turn away from their ancestors' traditions.

I'm not sure that humility from Pope Benedict, a German of course, on things like clergy abuse in the US is going to make much difference. But the crosses are very pretty in the landscape, and they're still being built and cared for.

Right, my waitress in the Gaststaette where I've been supping tonight wants me out. My tent and snug sleeping bag await outside in the pub's children's playground, in the shadow of the appropriately named St James (San Tiago) church here in Altenbeuern.

I'm the only guest and it's time to close up – with a thought of course that The Way, the Camino, the Dao/Tao are all the same idea in different religions. It's about the journey, not the destination. And that's what I also, in a modest way with Raven and my panniers, am on.

So, briefly to the rest, I'll attach the text after all to the second batch of photos.

Cirencester-Budapest and Back 2008
← Musings on life, love and more…
→ The rest of today’s photos