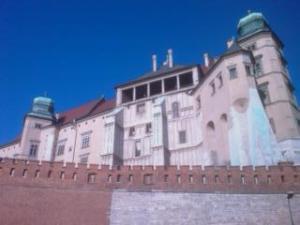 Seventy-four miles today from Krakow to unlovely and industrial Katowice in southern Poland via Auschwitz, which bothered me.

Tourists in their hordes, and history presented in blacks and whites. Very bad Nazis and very good everyone else. Including (for much of the museum text dates back still to Communist days in Poland) good Soviets, good Yugoslavs, good Poles who all tried to help the Jews.

But evil isn't an exclusively Nazi German preserve. Where are the massed tour groups being taken through memorials to the extermination of American Indians, to the victims of the wars in former Yugoslavia, to the victims of the Gulag in Stalin's Russia, to South American tribes wiped out by the Spanish, to Muslims murdered by Christian crusaders.

Yes, the Holocaust was terrible, in nature and in scale. But how history is presented at Auschwitz – see the famous Arbeit Macht Frei slogan over the gate – left me incorrectly uncomfortable.

One refreshing aspect, though, was a statement from the Austrian Consulate in the part of the exhibition dedicated to the Annexation of 1938 pointing out that Austria no longer sees itself simply as Hitler's First Victim, but recognises its own complicity, and is working on changing the exhibit.

Krakow, just 40 miles away, is of course a total contrast and an amazing architectural gem. Also teeming with tourists, so the view above looking up at Wawel Castle – seat of Polish Nationhood and royalty through the centuries – was taken with a view to excluding them…

And my special joy today? Not only does Raven have a tough, two-legged new stand from Hungary. We now have a Polish mirror, panoramic, so I can see when I'm about to be run down from behind by a 40-tonne road train.

Seems to be working – and rather more reliable than my previous protection system.