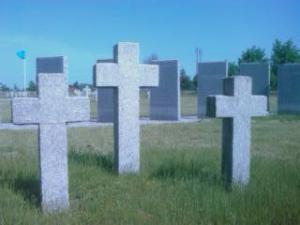 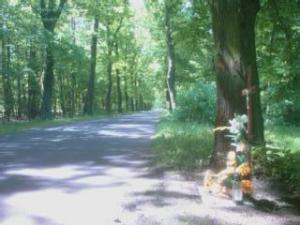 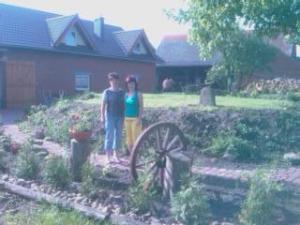 Replete in Wroclaw/Breslau with an awesome meal of ribs and Silesian cheesecake, it's Germany's and Poland's complex and bloody history which loom large today.

Last night's conversations with my formerly German hosts (mother Helena and daughter Monika in the delayed photo above, outside the impressive tourist barn the family has rebuilt with its own hands) have left a deep impression.

A Polish citizen since 1945, when Silesia was split off from defeated Germany and handed to Poland, Granddad at the farm had served with the German army during the War, ending it in with the Brits – for whom had had nothing but praise – in North African POW captivity.

He sees himself also as German, and is a good deal more uncomfortable than I, to put it mildly, with the way Germany's nose is still being rubbed in its past by the way Auschwitz and so much else is remembered.

Among the great unremembered and un-tourist-visited war crimes I could have mentioned in yesterday's blog about Auschwitz was the rape of some two million German women by Red Army soldiers at the end of World War Two.

Or the ethnic cleansing, perhaps understandable at the time but in today's law a war crime, of millions of largely innocent German civilians from their ancestral homes in old Prussia, Bohemia, Moravia, and many other parts of central Europe.

The Nazis were guilty of the most appalling crimes. But history's double standards, the justice of victors, just scream at you at every turn in this part of the world.

OK, I love Germany and the Germans, so I'm biased. But thinking psycho(l)otherapy, the way Germany is still in many ways denied the right truly to grieve its 20th century trauma is wrong.

It was good, therefore, to visit a German war cemetery today just outside Wroclaw, at Gross-Nädlitz/Nadolice Wieklie, one of the very few memorials in Europe where German losses are commemorated.

By 1998, the remains of some 10,000 German war dead, from nearly half a million who perished in World War Two in what's now Poland, had been transferred here. Of the 400,000 German soldiers who died in these territories in World War One, only a few thousand have even been identified.

Compare that with the love and care that go, rightly, into Britain's Commonwealth war cemeteries.

Those Germans whose deaths are marked bythe crosses and granite tombstones in the picture above were also beloved sons, daughters, brothers, fathers, sisters….

For me, making this journey, and knowing also from the inside how Germany has suffered, underlines how important it is that one day, Germans can find and are given space truly, at last, to grieve.

Which is why it is good to know that in one way at least, the German past here is shortly to be acknowledged more explicitly.

Where for 60 years Poland tried to rub out Silesia's once German identity, initially forbidding even the speaking of German here, EU membership is requiring a more relaxed attitude, and towns and villages are due soon to be signposted in both languages.

Which brings me, at last, to today's final picture. Also marking death, this time of two young men who drove their car into a tree on one of Silesia's beautiful, narrow, tree-lined road avenues.

The Poles have not torn down their trees in the way it's been done in Western Europe, to save lives. The result is a landscape and a cycle journey of great beauty. But the roadside shrines, many many of them, are a reminder how many young men continue to die not in war, but on the roads.

So onwards from Wroclaw, but also Breslau, towards Germany tomorrow.