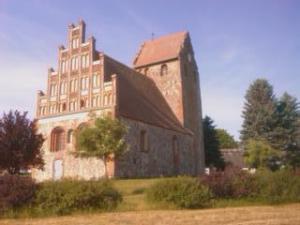 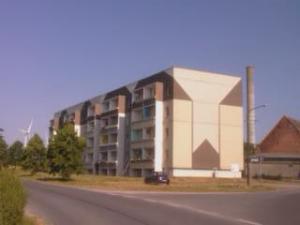 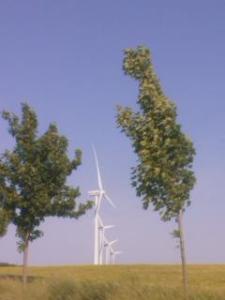 Blogger.Com is now behaving itself again (took 15 hours instead of the usual 15 seconds to post things yesterday, which led me rashly and briefly to predict an end to this blog…), so some more thoughts from northern East and now West Germany, as I head for Sheringham's partner town of Otterndorf.

Yes, another 100-mile day today, I have to admit, from Wittstock in the old GDR, where I splashed out last night on a Greek B&B and opulent dinner, to a campsite in Ratzeburg in the old West, near Luebeck.

The former East-West German border, once one of the most fortified and dangerous pieces of real estate anywhere on the planet, is now (see pic with Raven) just a nature reserve. You can scarcely see now there was ever anything other than heathland and grass.

As East German author Stefan Heym put it to me in an interview on that watershed election night in March 1990, when East Germans voted overwhelmingly for immediate unification, the GDR will end up just a footnote in history. How true.

Thinking big cycling distances, the stretch I've just done in two days, by the way, is very close to what Jutta and I did on our creaky old tandem in just one day in 1979, travelling along the only one of the old transit routes between West Berlin and West Germany along which, as not an autobahn, people then were allowed to cycle.

Not many did. The rule was you had to leave after sun-up and arrive at the other end by sundown. 240 kilometres/160 miles, in one go. We managed it, and I wrote a FOOC for the BBC.

But if my bum hurts this time (and yes, plasters have been applied in strategic places this week), t'is as nothing to the sheer agony of the last few dozen kilometres 30 years ago.

Raven and I were helped today by a very lively following wind, whipping also the hundreds of wind turbines along the route which illustrate how Eastern Germany, along with Spain, is now a world leader in alternative energy production.

I love them. They're huge – the generators on the top of the pylons are the size of gigantic sea-freight containers, 2-3 times the height of a man – and they're elegant. I cannot seriously understand why so many in the UK – hopelessly behind on this, as in so much else ecological including encouraging long-distance cycling – are against them.

Another interesting observation today, as I barrelled along for a good eight hours in the saddle (now 2400 miles on the clock since leaving home at Easter), was about architecture.

This part of Germany was building imposing and lasting red-brick churches and town fortifications long before anywhere in England, and this one village church in the picture is but one example.

Such a contrast to the awefulness of slab-concrete GDR-era industrial buildings and blocks of flats, which to their credit the locals have now at least tried to make look a little more attractive. As in picture above.

And final final thought for today. Largely fabulous cycle tracks alongside the main roads, but the downside is that officious German drivers, usually women for some reason, blast you with their horns if they think you're cycling on their carriageway when you should be on the cycle path.

Sometimes the cycle path isn't there, sometimes it's cobblestones. Sometimes I just prefer to be on the road, or haven't noticed there's a track.

But Germans – however much I love them – are indeed cliched sticklers for the rules. I 'm afraid to say I returned their hooting today with some pretty rude gestures…