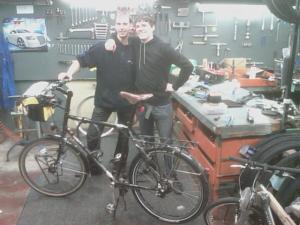 I can’t say the experience of sorting Raven’s tyre problems out has entirely redeemed Belgium, especially after 40 miles yesterday into Brussels along some of the worst cycle tracks and road surfaces I’ve yet encountered.

But Kevin and Joey and their bosses at Jupiter cycles in Antwerp went a long way to reassuring me that, even if Belgium is something of a failed state, it by no means has failed people.

In fact, Joey and Kevin were a) brilliant at their job (truing Raven’s wheel with fine-tuned expertise), b) really decent folk, chatting away without concern for time about their passion for bikes, and, unlike the otherwise of course admirable Germans, where I was politely asked to stay out of the workshop of one bike shop, for insurance reasons, c) utterly unhung-up about me using their workspace and tools to change a tyre and a chain.

Lack of attention to detail in a state has its bad aspects, but it also has its upsides. Which is perhaps why also I’m increasingly, less than one week away now, looking forward to landing on planet England again.

Imperfect, bit messy, very backward in matters bicycle (or Fietser, as the Dutch/Flemish so delightfully call bikes), but home.

Hopes to spend a lot of time with Oana here in Brussels have been a bit stymied by the Irish inconventiently voting No in their Euro-referendum on the Lisbon treaty. Oana is utterly dedicated to Euro-affairs, and this is a BIG story here.

But we’re having lunch and hopefully some dinner today, with currently Brussels-based former Hungarian language service friend Tamas Foti who is generously providing a roof over the head for a couple of nights, as he did for my daughter Katie a few weeks ago.

As in Otterndorf, preceded by Mother, two Braynes are better than one…

Renate wondered why I haven’t been writing in recent blogs quite so much about climate change. So, some heavy weekend thoughts.

Having spent so many hours so close to Europe’s glorious nature and wildlife over the past three months, I sadly remain convinced that this is all going to end in tears.

It’s tragic, as this is a good world, with wonderful nature, wonderful people, and largely with good intent.

But cycling alongisde Dutch motorways, experiencing the understandable aspirations of Eastern Europe for a share in this good life, or just being in Europe’s big cities with their ant-heaps of people and, by historical standards, astonishingly high standards of living, has constantly brought home to me how completely unsustainable all this is.

Almost all of it based on fossil fuels. Which have no long-term future. Even without the impact of rising sea levels, desertification and the rest. And Europe, and humankind in general, are just carrying on as if nothing will ever stop this.

Europe is and will be, at first, more protected from the worst immediate impact of change than will be Africa, Asia or America.

But catastrophe is coming. It’s just a question of how, and when. I fear deeply for the future of our amazing planet, and with it for that of my children and grandchildren.

But what a lovely planet it is.