With James Lovelock warning us in his avuncular way at age 90 this week that mankind is going to be reduced to one billion or so souls by the end of THIS century (and I am, as you know, convinced he is right), it’s time, I think, to call a halt for a while to climate change comments on a blog of which I’m probably the only reader anyway. (Prove me wrong!!) 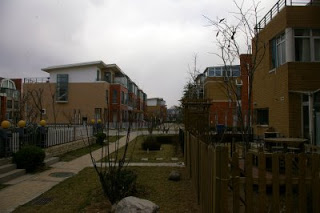 I’ve needed to write this, and I’m glad I have. It’s a record of the key things I have come to understand, too late like most of us, about where we stand as a species, and what that means for us existentially and emotionally.

I’ll use this space in the future for further occasional musings, especially when cycling is involved (after all, it’s got it in the blog name), which it will be the week before Easter when I cycle from Carlisle to Findhorn in Scotland, for a week at the community there.

But before I go, I do want to say a couple of important final climate-changey things in this interimly last blog.

First, the picture at the top is one illustration of why I, with Lovelock, just don’t believe that humans will be able to turn the clock towards a non-fossil-fuel-based sustainability in time to save most of us. The view is of a housing estate in Beijing where my translator when we were in Beijing in the 1980s, a short 25 years ago, now lives with his wife and 10-year-old boy.

As you’ll see, it’s not very different from an estate in Germany, and Xiao Ding and Xiao Hong have a plasma screen, marble floors, and a VW in the garage. They’re not rich, but they’re now well off like we are in Europe. 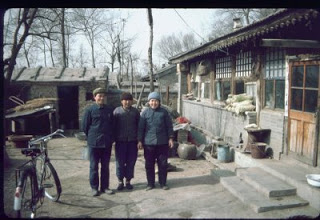 Now, on the right is an old picture of the Beijing Hutongs where Xiao Ding grew up and which I knew so well from my BBC time there.
Where, honestly, would you choose to live?
And that’s a choice we as a species have been making for some 40,000 years since the invention of agriculture – as Lovelock convincingly argues, the point at which, probably, we put ourselves on an inevitable collision course with Gaia.
There’s much more that I could say, of course. But one final thought also, which certainly needs expanding and which I haven’t seen argued anywhere yet.
It’s a comment about the monumental failure of journalism on reporting climate change and the threat that we now face.
Journalists (along with pretty much everyone else, of course) failed to see and warn the world of the certainty of financial collapse during the absurd boom years since the end of the Cold War. They failed, as a whole and at least in the Anglo-Saxon world, in their duty to challenge the official line on Weapons of Mass Destruction in Iraq – an issue where I am most certainly even more guilty than most, having believed Tony Blair and George Bush until well after the invasion.
Now, though, journalism continues to fail – although perhaps that might just be beginning to change, with dozens of climate change mentions on BBC Radio 4 alone this morning – to understand and articulate just how serious, joined-up and overarching the issue of sunstainability has become.
The coverage of Jade Goody’s sad impending death of cancer has been affectionate and kind, on the whole, and not at all out of place. But if only we were able to see how it fits a so much larger picture, that of our collective terminal diagnosis, and how little time we also have left.
How it all fits together is an incredible story, the most powerful and important narrative since the dawn of mankind. And the media haven’t yet got it. Of course, once people start dying in really large numbers, not just a few hundred here and there in New Orleans or in Somali floods, they will.
Death sells – and amidst the trauma and the collapse of entire groups of population, there will be some stunning reporting and images in the coming years.
So, signing off for the moment. These last few weeks of CC thoughts won’t, probably, have made a blind bit of difference. But I’ve got some stuff off my chest!

One thought on “Going Quiet for a While”