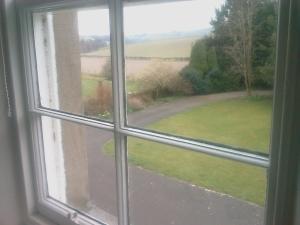 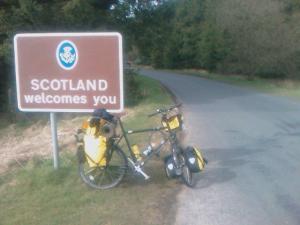 Readers of this blog from last year may recall my Europe trip being held up for several weeks in Vienna and Budapest with a sore left ankle.

Well, Achilles is back, and the rest of the body to which the tendon is attached is, after just one day, laid up in Hawick, stlll Scottish borders, with zero chance now of reaching Inverness by bike by Friday.

Above the view from the invalid’s window in a delightful, warm and dry farmhouse B&B just outside town.

Moral of the story, especially when you’re nearly 60? Stretch those muscles and tendons before charging off like a 20-year-old and doing 65 miles from a cold and clearly (despite regular running in Cirencester Park) less-fit-than-imagined start

Still, with luck it’s a mistake I’ll need to make only once, though how much cycling I’ll get done this week, not at all sure.

Time, therefore, to think and muse yet further on climate change etc.

On which, it occurs to me that while the fundamental problem isn’t CO2 but overpopulation, that’s not in the sense of too many people having been born these past 50 or 100 years, and therefore something that can be tackled with birth control or smaller families.

It’s that too few of us have died – of disease, hunger, war and injury in the way we did for 10s of thousands of years before hygiene and modern medicine came along.

It’s a heretical thought, but if there are historians to look back in coming years and consider where it all went so terribly wrong, I suspect that, along with fossil fuels, they’ll name the discoveries of germs (and the need for hygiene) and of antibiotics as the most important nails in the coffin of advanced civilisation.

In other words, it was the discovery of how to keep people alive that will have condemned our species to death. Not what was intended. And – although grimly logical – how sad.

Sent from my Windows Mobile® phone.