Do We Deserve to Survive? 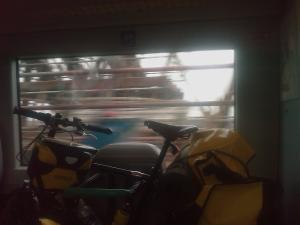 The photo doesn’t show it very clearly, but with the journey resumed by train from Edinburgh to the Highlands, across the Forth Bridge (see pillars in the background), I’m moved to wonder whether we as humans really deserve to survive.

My tendon is behaving itself after all, to my surprise, but this morning in Edinburgh, the locals weren’t, and my bike is minus one front pannier, nicked from right next to me at a lovely Turkish café as I drank a coffee and read my map.

We are capable as humans of wonderful things. But at least as often, we can be despicable and selfish. How much will that pannier, containing a bike lock, bike tools and a wet bike cover, be worth on eBay to the thief?

Twenty quid? I can keep cycling, but it leaves the foulest of tastes.

A bit like fatty foods, which a new survey reported by the BBC this week tells us we’re continuing to consume regardless of knowing how it can contribute to cancer.

Cognitive dissonance, as also in continuing a carbon lifestyle we now know will kill us as a species if we carry on consuming as usual.

Sore at the unxpected loss of my pannier, I expect the worst of human nature when things get really bad. There will be goodness, kindness, but there’ll be a lot of the other as well.

Subjects to be discussed at a reassuringly rich set of public meetings in London in the coming few weeks on climate change.

In reverse order, on June 20 Birkbeck College is discussing the psychodynamics of climate change, and why humans prefer stay in denial.

On May 12, the Science Museum has a free debate on the unprecedented action it says is needed, from the global political to the individual, if we’re to have a chance of getting through this crisis.

And first of all, on April 28, the Frontline Club near Paddington is creating a space for journalists and those who care about journalism (at last) to quiz politicians on why it’s so hard for the system to initiate the change we need.

Can human nature change? An Achilles tendon can heal much more quickly than expected. But this morning, minus my pannier and also minus my Dad, who died quietly yesterday at 87, unaware to the last what was really happening to him, I am not very optimistic about people.

Climate Change
← Greetings from Achilles
→ It Really is Over. A Paradoxical Relief

One response to “Do We Deserve to Survive?”