Tandeming through the Berlin Wall, anno 1978 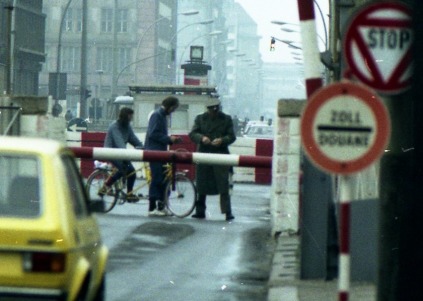 As Europe remembers the opening of the Berlin Wall 20 years ago this week, I can’t resist posting a picture of what it used to be like in the old days – as Jutta and I cycled through Checkpoint Charlie on a tandem.

I was working for Reuters at the time, and we lived in East Berlin, crossing the Wall pretty much daily between West and East, me on my reporting assignments and Jutta attending her teacher training at the Free University.

As we pedalled up, the East German border guards (who we actually knew quite well) were friendly but flummoxed.

“Herr Gott nochmal,” they said, “Good grief! If we let you through on a tandem today, we’ll have to let people through on horses tomorrow.”

I never did see a horse go through Checkpoint Charlie.

However, only just over a decade later, the guards were out of a job, and three Brayne children (from right to left, Christopher, Alastair and Katharine) who had meanwhile materialised were now clambering through and around the redundant wall.

I remember saying, quite often, in the 1970s and 80s when I was reporting from the Communist world that one day, historians would look back on this system as a gigantic wrong turning in history.

I could and did never imagine, however, when and how, and above all how soon and how rapidly, the system would come crashing down. 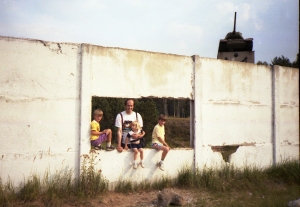