Talking at Deutsche Welle about Climate Change and Journalism

It’s not the most comprehensive of packages, but Deutsche Welle in Bonn have done an interesting job of summarising a panel on the journalism of climate change which I ran, together with Mary-Jayne Rust, in Bonn in June.

With some 1400 participants registered, many from developing countries helped financially to take part by the German Foreign Ministry, it was one of the world’s most substantial meetings so far on the reporting of climate change.

Massive new insights? Not all that many, but a worthwhile occasion – and not just for the fabulous food and Rhine cruise which were part of the social package.

For the record, here’s a report of our panel for DW, and below an article I’ve written on the conference for Transformations, the journal of Psychotherapists and Counsellors for Social Responsibility PCSR. 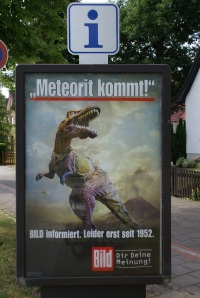 If the dinosaurs had been reading Germany’s Bild Zeitung, implies the caption to this street advertisement, then they might have been prepared for what was coming and have adapted to a post-meteorite planet.

Unfortunately, the poster continues, Bild has been in the reporting business only since 1952. So, without the media to warn of impending catastrophe, Tyrannosaurus Rex became extinct.

It’s a neat and clever poster, photographed a couple of years ago near Hamburg as I was cycling across Europe on a trip inspired in part by my own concern (discussed in past editions of this journal) that such journeys won’t be possible for much longer as humanity heads towards civilisational meltdown.

The implication of the advertisement  is an important one – that if, unlike the illiterate and newspaper-deprived T-Rex, you read Bild Zeitung today, you will be prepared for tomorrow’s species-threatening challenges.

But there are two fundamental problems. How accurate and responsible is Bild’s and the rest of today’s post-dinosaur media’s reporting of tomorrow’s challenges, from climate change to peak oil to environmental collapse ? And, even more critical, are readers/listeners/viewers any more prepared to take warnings seriously than T-Rex would have been?

As a former journalist now turned climate-change engaged-to-obsessed psychotherapist, I showed this picture as part of an Ecopsychology UK workshop presentation to an unprecedented three-day international conference in Bonn this June. Organised by Germany’s equivalent of the BBC World Service Deutsche Welle, the gathering brought together more than 1500 participants from 95 countries to discuss the reporting of climate change.

My argument was that a) the world’s present media are failing dramatically in the task of presenting the reality of climate change science, and that b) when the warnings are given, reading and viewing publics, paralysed by what might be termed pre-traumatic stress disorder, are unable to hear the message either.

Max Boykoff, an American media researcher who also presented at the Bonn conference,  has a useful graph capturing the disconnect between the bulk of today’s informed scientific opinion and the climate change story as reported in the popular press.

Take a careful look at the graph, and its matching of proponents and reporting effort against various scenarios for the impact of climate change.

The message? Most of those who research these things now conclude that human-forced climate change will be of substantial to catastrophic cost to mankind. The media, however, reflect the debate as being about a negative impact that lies between only neutral and substantial.

There was a multitude of worthwhile and worthy workshops at the Bonn conference. Our 90-minute Ecopyschology discussion was, however, the only forum specifically to consider the emotions and the psychology of mankind’s inability to take climate change as seriously as it deserves. Pitched as one of a dozen or so concurrent sessions, including against one cleverly titled “Sex, Catastrophe and Climate Change,” we drew only a limited audience of 45 or so.

Mary-Jayne Rust, London-based Jungian analyst and one of the UK’s best-known speakers on the  psychology of how we deal with climate change, persuasively explained our responses in the context of mankind’s self-understanding as the mythical hero, journeying from a primitive, dark world of cave-dwelling ignorance to a brighter world of ever-increasing knowledge, freedom and wellbeing.

Traditional psychotherapy has been as much part of the problem as of the solution, with its roots, as Mary-Jayne recalled,  in Freud’s definition of the “principle task of civilisation, its actual raison d’etre, [being] to defend us against nature.”

To my mind, Mary-Jayne’s was the best presentation of the entire conference, calling on journalists (who are, after all, in the same narrative-exploring business as therapists) to create what she termed a new story, which is not just about reducing carbon emissions but about changing the way we think about ourselves as humans in relation to the earth.

What we need, said Mary-Jayne, is a different kind of hero – “one who can live with uncertainty, freely admit to failure and vulnerability, knowing that the dark past is not a womb in which we might get trapped, but a source of wisdom.”

The Bonn conference was certainly bold in its conception, and well worth the staging. Indeed, it’s probably only the Germans internationally who would have been willing to spend the money needed to bring together so many climate-change-concerned folk from around the world.

That included inviting and paying for hundreds of developing world journalists and activists to travel to and stay in Bonn, addressing as the pre-conference blurb put it “the fundamental changes now needed in attitude, behaviour and lifestyle, at an individual level as well as in the economic and political realms at large.”

But will the conference fundamentally have changed  anything in how the world’s media approach the story of climate change?

I strongly suspect not. As I argued to our workshop, we humans will begin seriously to alter our behaviour around sustainability only when our species’ survival alarms begin to sound. And that will happen only when we individually – and more important collectively – feel emotionally as well as acknowledge intellectually that the looming catastrophe of sustainability, as much as of climate change, is about our own literal survival and that of our children and grandchildren.

By then – and I remain sadly convinced that this is in fact already the case – for the civilisation which we take for granted and which allows, amongst other things, for me to be writing this article and for you to be reading it, it will already be too late.