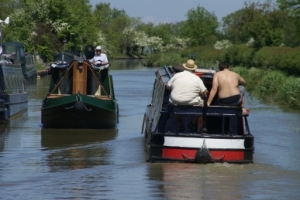 The ducks may stay slim, but that’s not very true of homo sapiens on the canals.

Have you noticed just how many of our fellow canallers are becoming obese? (OK – the photo here is from last year – see below – but I just love it…) Perhaps it’s the evening beers and sausages and chips. Perhaps it’s all that sitting at the back of the boat while the girls do the hard work on the locks. Perhaps it’s just a symptom of our modern civilisation – obsessed with consumption and unable to say no to that extra-large glass of wine and extra plate of chips.

But, that’s not the point of this blog, which is to enthuse about yet another magnificent day cruising gently towards Birmingham.

If last night’s mooring point was one of our favourites on the Grand Union, the Lapworth flight is certainly our favourite locking experience on the Warwick Ring, or indeed (perhaps with the exception of the Tardebigge between Birmingham and Worcester) anywhere on the canal system.

Turning left off the Grand Union – the canal system’s equivalent of the M1 – is like turning from a motorway onto a charming B-road country lane. The Lapworth locks are the size of Dinky Toys, and twist and curve their toytown way up to the north-west, past one of the best Canal shops on the system and with barely room for two boats to pass before we’re through the pound and into the next tiny lock.

Here, we lock largely on our own, one of us leapfrogging up ahead to set the next lock as the Molly May’s skipper – the two of us take it in turns – brings the boat to a gentle halt on the exit to each lock. We have to trust that she’ll stay motionless as we jump off to close the lock gate and lower the paddles, before heading on into what by now is a neatly-prepared next lock, gates invitingly open.

Water levels continue very low up here, with the reservoirs that feed the canals apparently down to 20% of their capacity. We begin to worry whether the canal system as a whole will be able to open next year, as it’s already touch-and-go in some places whether we’ll be able to get through. It’s all very well loving the sunny weather. But good weather this winter will involve a lot of rain.

Indeed, as we moor up for lunch just beyond the confusingly named Lock 2 at the very top of the Lapworth, it

takes at one point just one emptying of the uphill lock behind us to tip us gently to one side as the Molly May finds herself aground in a suddenly much emptier stretch of canal. A bit like being in the bath as the water level dips below the waistline…

We quickly untie the ropes and head off into open, central water before a further approaching boat drains even more water from our stretch.

(The canal’s alarmingly guillotine-style lock number 1, by the way, on the right, is much closer to Birmingham, at the end of the Stratford Canal and an old stop lock designed to protect the canal’s water being nicked by rival canal companies on the Birmingham and Worcester),

From here it’s a gentle slide in hot early autumn sunshine past one of the best bakeries on the canals (100 yards to the East from Bridge 20) to a friendly, adequate if, again, not exactly Michelin-starred pub supper at the Bull’s Head in Waring’s Green. And another early night.