Quite how I thought we might be able to make it all the way to Gas Street in Birmingham yesterday, I’m not sure, as today we found ourselves moving surprisingly slowly through the southern suburbs of Birmingham past Cadbury’s Bournville  headquarters (how sad that the company is no longer British-owned) with its uplifting odours of chocolate.

Before reaching Birmingham, the character of the canal changes quite sharply, and moored boats suddenly have solid window protection against vandalism. There are shopping trolleys abandoned in the water, and nylon cables that wrap themselves around our prop shaft, reminding me that it is indeed important EVERY morning to check the prop for debris.

I do sometimes despair of human beings, ready to chuck anything into the canals and anywhere else without a thought for other users.

At the turnoff right towards Birmingham – left heads towards Worcester and the Avon river –  we catch up with a delightful couple encountered during earlier locking, piloting a boat called Pipe Dream and stuck, we discover, with an abandoned car tyre wrapped around the propeller. 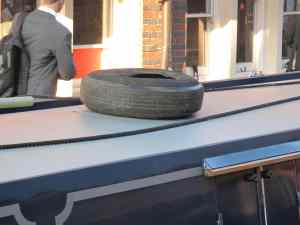 Such is the rubbish that ends up in the canals around here, but we’re delighted in Birmingham that evening to meet  Pipe Dream now safely moored up for a couple of days, sent on their way by the canalside equivalent of the AA who were able to remove the offending tyre…

My faith in the goodness of people is further restored by a lovely couple we meet on Birmingham’s Gas Street moorings who come from Maryland in the US and so love the English canals that they’ve bought their own small boat and now holiday here twice every year, six weeks at a time.

No wonder that they come through Birmingham – the interweave of the early 19th century and the glossy modernity of the 21st is one of the most thrilling experiences that canal cruising in England can offer. Mooring up and sleeping over in Gas Street in the shadow of Symphony Hall and the Exhibition Centre is quite magical, and our hearts lift as we cruise gently away in the morning.