From Birmingham along the Brum and Fazely canal, dropping away from the town centre along the Farmers’ Locks under Birmingham’s distinctive BT tower, we now have the canal system virtually to ourselves.

It’s a hard, delightfully but also disturbingly warm early autumn locking day, one of our busiest yet in 10 years of canal boating, and it also reminds me how dangerous it is to lower one’s guard even for a moment on matters of safety.

I’m aware as we set off from Birmingham how slippery my plastic Croc shoes are on the wet brickwork of the lockside, so I quickly nip into the cabin to don my much sturdier walking shoes. Lulled into a sense of greater safety, at the next lock I decide to take a short cut across the front of one of the gates, and I lose my grip. Thankfully, my responses are quick enough to catch my fall, and it’s only my legs that get a soaking up to the knees before I manage to catch myself and pull myself back onto the lock gate.

But I scuff my shin very badly, and lose a windlass into the water. Several weeks later, the wound is still healing, slowly. Moral of the story? Even after years in this game, never, EVER let your guard down. The water in these canals is mighty filthy, and added to that, eighteen or so tons of narrow boat have one almighty momentum.

Almost every year on the English canal system, someone dies. Last year, we met a very sad boater whose first wife had fallen into a lock and been dragged under into one of the sluices as the lock emptied. He had married again, and wouldn’t let his new partner out of his sight.

Not that I want to put anyone off, but it’s worth taking care. And thank goodness the Health and Safety brigade haven’t yet discovered how most canal boaters learn their craft by trial and error, and with the minimum of tuition. It works. So while being appropriately careful, let’s not allow the system to be changed.

Other thoughts from today, other than that the M6’s famous Spaghetti Junction in Birmingham is no prettier from below than it is from above?

Locking, once you get into the rhythm, is rather like meditation. Total focus on the task in hand, and entirely in the moment as paddles are lowered, locks filled and emptied, gates prepared further along the flight, and moving assuredly back and forth to allow the boat to glide through the locks as smoothly and rapidly as possible. 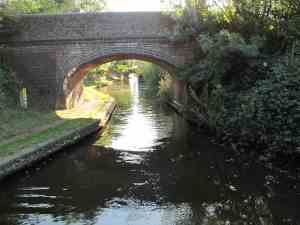 Also, more prosaically, don’t be alarmed at Aston Junction to find that the locks are, well, locked. Here, and further along the locks as you head out of Birmingham, you need the anti-vandal key that’s in Molly May’s locker at the back of the cabin on the right as you stand in the stairwell. We were on the point of turning round and taking the rather longer Grand Union arm, when a friendly local who knew the system turned up and explained what we should do. Who says there are no such thing as angels.

Hard and rewarding work, ending after nine hours cruising and an awesome 35 locks with the best glass (or two) of cool German wine, and two tired boaters warmed by the warm autumn sun. A concluding thought for the day? It’s certainly possible to do the Warwick Ring in a week – but you have to keep going.