Well, after five glorious cycling and canoeing weeks, the last two with Kat and Mela, it’s time to leave New Zealand, with a last blast of images (fuller set here on Google+ as usual), and some concluding thoughts about what has to have been the best cycling tour ever (though could of course have been longer!) and this extraordinary country that is now Kat’s home.

We finished our journey canoeing with a lovely bunch of Kat and Mela’s New Plymouth friends till midday yesterday (this is being posted from the Auckland Museum on Tuesday before a midnight flight home – free WiFi! which isn’t the norm in NZ) down the amazing Whanganui River, nearly 100km of almost untouched, virgin rainforest through the most stunning canyons and rapids.

Yes, Sue and Claire, I (with Mela in the prow) did fall in – we had different ideas of which side of a pretty solidly large rock to steer our Canadian canoe, so managed to strike it full on in the rapids…

But the water was warm, the barrels holding our camping and photo gear (largely) watertight, it was all in the spirit of the three days and no harm was done.

Indeed, the stretch of river with the main rapids is known for its 50:50 chance of tipping occupants out of their craft – in a country which remains (largely, again) gloriously free of our European and American Health and Safety culture. Here, they let you take sensible risks, and there’s almost no nasty financial litigation.

Amongst other things, hiking and canoeing and bungy jumping and river-boating and biking and tramping (hiking, to you and me) and jetboating and the rest that makes NZ the adventure capital of the world. And huge fun for all ages, including as I can confirm the near-geriatric.

I’m sure this is where the phrase, gorgeous landscape, comes from. Quite stunning – and this was a small one.

Our second night campsite alongside the Wanganui river. Those ferns are out to get you… And they do, big time,

There’s so much I’ll miss about NZ – the biking itself, the girls Kat and Mela, their friends from New Plymouth, the wonderful people I’ve met on the road, the Tuis, both liquid and feathered – but the one creature I’m glad to be saying goodbye to for the moment is the admirable NZ sandfly.

The’re gutsy and brave little buggers, and seem to love pasty white (though rather darker than a month ago) European flesh. Below, a snap of me at my usual pastime of scratching the bites. On the Bridge to Nowhere, as it’s called, built in the 1930s for a European settler population in the Whanganui forests that ultimately failed.

Now, the bridge is lost in the middle of jungle – bush, as they call it here, in a tone that almost regrets its very occasional victory over the settlers – a reminder of just what European settlement did to NZ’s natural flora and fauna, as I’ve said here before, in an astonishingly short space of time.

And here are Kat and Mela with rainforest and bridge. It didn’t help the settlers, but is now one of the most powerful tourist draws on the North Island. It worked in the end.

Just as I won’t miss the sandflies, neither will I miss the endless vistas in NZ of cow- and sheep-dotted pasture.

Outside the national parks and what Kiwis call Scenic Reserves (as if they’re being kept that way primarily for humans to admire, but not necessarily bad psychology in a country that doesn’t really yet do environmentalism), there’s scarcely a stretch of landscape, it seems sometimes, that hasn’t been felled and cleared and turned over to grass and pasture.

And fencing – there can’t be a country on the planet with more fencing than NZ. Below, rows of the characteristic stuff in Hawke’s Bay.

Thankfully, NZ stayed (yet again, largely, as there was one off the New Plymouth coast at new year) clear during my stay of earthquakes –  a relief given how violently active the Pacific and Australian tectonic plates are just a few km below our feet.

But there was a LOT of rain down the West Coast of the South Island after I left – to the extent that one of the main bridges that carried me north was partly washed away a couple of weeks after I crossed, and out of action for several days.

Now THAT would have stymied the cycling plans…

And thankfully also, the volcanoes for which NZ is very well known also managed to stay quiescent – and looking just like volcanoes should, straight out of school geography books. This one spied on the road to the Whanganui River, in a mountain/volcano cluster with Tongariro, Ruapehu and Ngauruhoe in the centre of the North Island.

Oh yes – another thing I won’t miss is the f***ing cows. No, not only that but f***ing (farting). Though the sign below did make Kat and Mela and me smile. Watch out for the frisky cows in Hawke’s Bay.

Talking of Hawke’s Bay, I have of course to mention New Zealand’s Sauvignon Blanc, as in, the best wine in the world.

We had a fabulous biking day touring the wineries south of Napier, developing the connossieur’s true nose (and pretentious ability to brag about raspberry on the nose and smell-of-old-books on the palate etc…). Illustrations here of how it’s done… 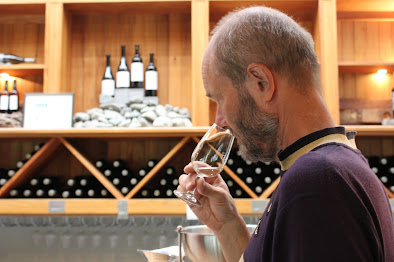 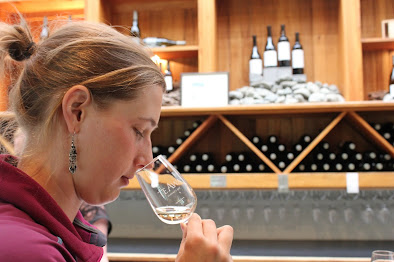 Finally, before they close the AucklandMuseum in ten minutes, keep reading for a pic from today just round the corner from where I’m writing.

The museum doesn’t point it out, but the Maoris seem to have a wonderfully earthy and natural relationship to sex and all the body parts that make it possible.

Sacred carvings at collective sites called Maraes are often strikingly explicit, with male figures endowed with enormous organs. I did enjoy this carving, with said parts out of view, but pretty clearly busy. You can tell the difference between male and female in Maori culture by the tattoos – men can have them all over their face, women only around the mouth and chin.

Hey ho – so much more that could be said, but what a trip.  Thanks Kat and Mela – back soon.

And totally finally (with a reminder of fuller set of photos to be found at  Google+ as usual), Kat and self in full flow… 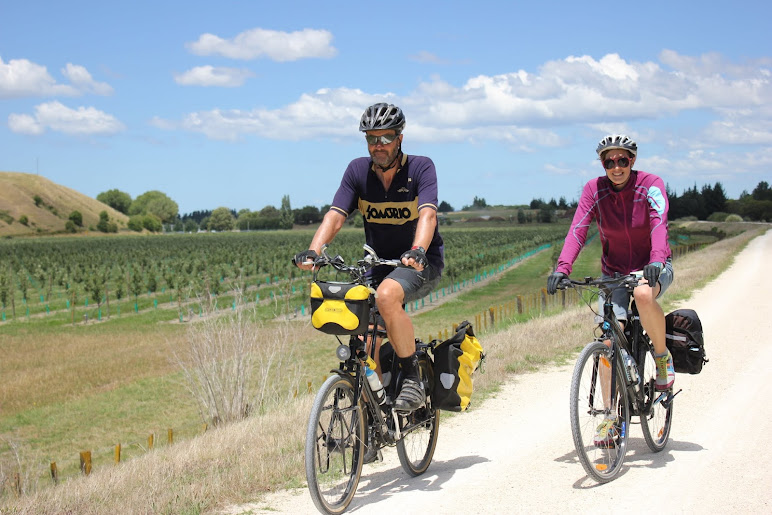