A hundred years from the start of World War One, I’ve finally found the peg I’ve been seeking on which to hang my first Braynework blog post in nearly a year.

It’s been the most extraordinary year, in which I left Cirencester and my former partner Sue, sold the beloved Wychcroft home which we bought in 2003, moved to my childhood home of Sheringham in Norfolk, divorced, bought a wonderful new house round the corner from my elderly but still sturdy mother – and to cap it all, remarried my first – German – wife Jutta.

Yes, a breathtaking amount of change in well under a year. And a challenge to describe with sensitivity to others involved on a public blog that’s visible to strangers, to psychotherapy clients and supervisees, to relatives near and far – and to friends present and former (for there are those, as is inevitable when couples split up, who sadly did not wish to join me on this journey).

For the two of us, it’s been an exhilarating, entirely unexpected, and enriching journey, involving struggle, challenge and no little screeching of emotional tyres/burning of relational rubber as we rounded the next corner.

There is much that Jutta and I could – and hopefully one day will – write about about our journey away from each other in 2000 after 23 years of marriage, and back together again 13 years later as empassioned psychotherapists and, with luck, rather more settled souls,

For the moment, though, let the job of public acknowledgement of this odd couple’s new togetherness be done through the memory of an address we co-wrote and read at our local Anglican church in High Barnet on the 60th anniversary of the end of the Second World War in 1995.

I stumbled across the file sorting out some old photographs of our times together, and we feel it captures rather well, especially in this year that marks the 100th anniversary the 1914-18 War to End All Wars, the warmth, challenge and growth of this one Anglo-German relationship.

We spoke alternately, and I’ll illustrate the text with some relevant photographs.

Mark: My name is Mark. I am British and if it had not been for the War, I as Mark would not exist.

Jutta: My name is Jutta. I am German, and I owe my life to the destruction and upheavals of war.

Mark: I was born in London in 1950, almost exactly five years after Victory in Europe Day. In my family I was the first-born of my generation after the war. I am named Mark in honour of my Great Uncle Mark, son of a cloth merchant in Manchester.

Mark died in 1942 in a raid on the German-held dry dock at St Nazaire on the French Atlantic coast. The man whose name I bear was just 19, killed in command of a wooden torpedo boat helping make what they came to call the Greatest Raid of All. At the time . Mark was my mother’s favourite Uncle.

Jutta: I was born in 1951 in West Germany. My father was conceived in occupied France during the First World War, the illegitimate son of a French girl and a German officer.

My French grandmother died, and my father came to live with his father, a wealthy businessman in Dresden who had trained as a cloth merchant in Manchester.

My father’s first wife and his daughter Angelika died in Dresden in the last months of World War Two, Angelika of diphtheria, and his wife in the allied bombing in February 1945. Captured in Italy, and without a family to return to, my father found himself at war’s end in a small town in Bavaria. It was there that he met my mother.

Mark: I grew up on schoolboy tales of British bravery and German perfidy. My grandfather had been a fighter pilot in World War One, duelling with Germans over France in 1917. I was taught to be proud of what my family had done in war.

At school we swapped war comics, with their simplistic tales of stupid Huns and heroic British Tommies. After all, we, the British, had won the war. We were right and good. The Germans had been wrong and bad.

Jutta: Throughout my school days, World War Two was a taboo subject in class. Except for my father, few people ever talked about their wartime experiences. Men who had been prisoners of war in Britain told me how well they had been treated. Men who came back from the Soviet Union didn’t talk.

My father never came to terms with the destruction of Dresden, but I was never aware that he felt any animosity towards the British.

I knew in those years of a deep fear in Germany of Russians and Communists. That intensified in 1961, when the Berlin Wall suddenly cut through a sunny August holiday on a campsite in Italy that made all adult faces turn ashen.

Mark: Through the 1960s, I came to know many Germans. My mother taught German in a Norfolk secondary school. We had distant relatives in Hamburg, and I thought that very exotic. We had Germans to stay at home, an endless succession of paying guests as my by-then-divorced mother struggled to pay the mortgage and raise four children.

So, when the time came, it seemed natural for me too to study German, to go on exchange visits to Germany, and, in 1968, to work in Germany, in Bavaria, before going on to University.

The Germany I discovered was modern, and welcoming; my German friends and their families kind and caring. But I never looked deep inside at any prejudices that I still carried.

Jutta: I must have been 10 when I saw, in a magazine at my mother’s hairdressers, pictures of naked women and children lined up in a Nazi concentration camp.

I was shocked to see how my people had inflicted such degradation, and I felt the burden of that collective guilt.

At school my favourite subject was English.

I was inspired by my teacher’s descriptions of the English people — their tender care for their roses and their gardens, their ability to relax in comfortable clothes at weekends and their love for Sunday papers.

In 1968 I visited England for the first time. It was a puzzling experience, finding a country that seemed so poor compared with Germany, yet a country I had always looked up to. But I sensed already the very special importance that England held for me.

Mark: It was in 1971 that I suddenly came face to face with the ambiguities of the Second World War. Studying in what was then Communist East Germany, I visited Buchenwald, the concentration camp overlooking the Weimar of the poets Goethe and Schiller. In the huts and the quarries of that camp, I could feel the wind of evil blowing in my face.

But also in 1971, for the first time, I visited Dresden. I found a city without a soul. The ruins of the Church of Our Lady.

The shattered Palace of the Saxon kings. The terrible emptiness, the grief in the air, the sense of unfinished mourning.

This, however, was something we had done. The brave British and their American allies, bombing what had been one of Europe’s most beautiful cities, a city virtually without defences and packed with refugees seeking escape from the Russians, in what they hoped would be the Western occupation zones of the soon-to-be defeated Germany.

From childhood, I had come to believe that good had been exclusively on our side. I had never really understood what war had meant for the people of Germany. In Dresden, I suddenly felt very uncomfortable to be British.

Jutta: In the early 70s, I travelled more extensively in Europe and stood at many war memorials, feeling not at all proud of being German, and deeply sorry for each lost, wounded, homeless and bereaved person, and for all the suffering inflicted in the name of Germany.

I went to Moscow to work in the West German embassy. I loved Russia; its literature, its language, its sheer vastness. Somehow, I was also drawn by the pain of the Russian soul, by what I suppose I sensed was the common ground of labour camps, of lost human dignity, of suffering.

It was there that I met Mark.

Mark: In due course Jutta came to stay with me in London. 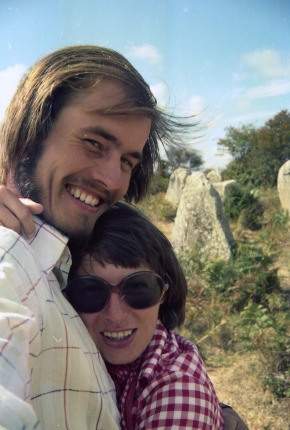 We took a holiday to France. And suddenly, thinking of a life together, I realised the extent to which I too still had to overcome my own prejudices against Germans, those prejudices so dangerously absorbed into the unconscious through the years of childhood.

We visited St Nazaire, where my uncle was killed; we saw the submarine pens, the monument on the river with Mark Rodier’s name on it,

and therefore my name too. We visited a German war cemetery.

At the time I said nothing of my uneasiness to Jutta. I knew that what I felt was unfair. She was not to blame for what earlier generations had done. And I was frightened of what I found in myself.

Jutta: Travelling around France in that year was comforting for me, to stand at war memorials next to a young British man with whom I could look forward in a spirit of reconciliation, rather than backwards with a sense of shame — and with whom I could grieve for my own Uncle Hans, my mother’s older brother, who fell in France aged 17.

We visited cemeteries and cathedrals; we lit candles for the dead of both our families and of all nations.

That was nearly 20 years ago. Since then, we have travelled the world.

Jutta: Now, we have three children. They are English; and they are German. We are a European family.

Mark: Fifty years on, as I think of that Day of “Victory in Europe”, I suddenly sense why it was that Jutta and I were meant to come together. Dresden and St Nazaire. Angelika and Mark.

Jutta: In our own togetherness, and in our daily struggles to find for our own family love, and tolerance, and understanding, we in our small yet important way, every day and in everything we do, are called to help lay to rest the ghosts of Europe’s past.

Mark: Like war, peace begins and ends in the hearts of each one of us.

We call to the memory of Uncle Mark, of Angelika, of Uncle Hans and of every soul that has suffered or died in the fires of hatred and misunderstanding to watch over us, to give us strength, and to bring healing — and humility — to our nations.

4 thoughts on “On Anglo-German Reunification and Reconciliation”