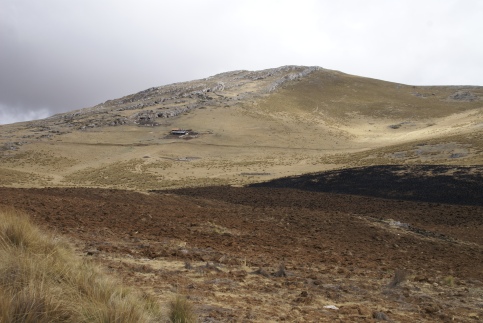 Blasted Peruvian uplands, ploughed up and burned for superfood maca.

Those who visit this blog know how concerned I am about climate change, and the psychology of human denial of the urgency of approaching catastrophe.

Our 32-year-old son Alastair is now on a kind of retreat in Peru, where we as parents were ourselves recently doing much the same – and where, as picture illustrates, we saw close-up the devastation we humans wreak wherever we go.

So, here – cross-posted from Facebook – are Alastair’s urgent musings on climate change and survival, which I thought were well worth a wider airing.

(I’ve just toned down some of his expletives, but look forward to responses…)

If we’re f***ed with climate change if we don’t start reducing our economic activity so that emissions can drop at never-before-achieved rates…. how do we do that without huge numbers of people losing their jobs and livelihoods and therefore their ability to feed themselves and their families?

In all the debates around climate change and how politicians and governments aren’t doing enough, I’ve literally never heard anyone ask this question, let alone answer it.

The science is absolutely clear; we need to reduce the rampant churn of resource consumption dictated by our current economic system.

But if the question of how people feed themselves – realistically, right now, today –  if that question isn’t asked, let alone answered, how can we possibly make any coherent yet rapid move on this issue? Either via capital-P Politics or via local direct community organisation.

A crucial reality of climate change is that many of us still don’t really engage with the issue properly – including me, and I know most of the facts and consequences of climate change after 12 years of awareness and following the real news. This reality is that we hit an emotional brick wall that leads either to denial or apathy – or, being charitable, the inaction of simple hopelessness.

And in that space, forget about making a change. That requires vision and hope. We don’t need more facts or more technologies. We need people to really truly *believe*, We need a positive emotional engagement of hope.

And to do that, we need to know, what do we do for survival ourselves in our own wee lives if our current job or livelihood is part of the problem?

The only answers I can think of, off the top of my head and after years of being engaged with these issues, is small-scale organic farming/permaculture and crafts like pottery and blacksmithing.

Seriously?! That’s the f***ing best I can come up with.

My guess is the significant majority will react to those options with the thought “Well, yes it’s great some people are doing that, but that’s not something I’m going to do, or can do”.

And a simple fact is that you can’t force them. I rather think they need to come up with the answer themselves… that way there’s a chance they’ll believe in it, and a chance that the emotional pendulum will finally swing behind the changes we need to make.

So, I rather think this question is the key to unlocking our collective emotional engagement with climate change. We need a mass referendum on “what the f*ck do I do, how the f*ck do I feed myself if the current system isn’t working?”.

Why don’t I see that question being explicitly posed everywhere in the mainstream right now? I’m not talking about Earth Mother News or the Ecologist or any of the switched on and aware publications and forums where this wee Facebook post isn’t news at all.

I’m talking about News at 6 on the BBC. I’m talking proper mainstream.

I’m too much a thinker with my head in the clouds and no political skill to have the smallest hope in hell of making this question ‘go big’.

Any socially capable, hopeful and people-friendly folk feel like making a noise on this?