Wow – yesterday, Jutta’s 65th birthday, was quite some cycling day – 115km south from Miranda to, yes, thankfully, another hot springs holiday park, this time just outside Matamata and very close to where Peter Jackson filmed Hobbiton for his Lord of the Rings.

We indeed had a gale behind us, which rocketed us powerfully forward along along the Hauraki rail trail.

The wind however also deposited on us about two years’ worth of rain in our last two hours before reaching the dry safety of the Opal campsite – all survived with good humour, and much relief on arrival.

A glitch in the skipper’s mapreading (I own up) brought us unnecessarily through Matamata itself, but that did provide an unexpected opportunity to call by one of NZ’s aircraft-hanger-size supermarkets, in this case Countdown, to buy some Sauvignon Blanc and the appropriate bunch of flowers and roses to mark the good lady’s 65th.

And in this public space, nearly three years now since we partnered up again about our 14-year break, let this one husband record officially how enormously grateful he is to be married to this wonderful lass, and how proud he is of her guts and determination in joining up on this crazy-and-exhilerating Tour Aotearoa the length of New Zealand.

(Not forgetting that we’re fund-raising for the Rory Peck Trust, and while we’re still well short of half way in kilometre terms, we’re just over half way to our funding goal of £3000, £1 for every km pedalled, and would love to make the big total in time for our arrival in Bluff at the bottom end of these islands in the week before Easter).

Definitely the Bugger Cafe on the road towards Thames – they’ve been refused permission to set up cafes in Europe with that name, as the EU will accept only a more genteel Bother Cafe title.

And here, one I prepared earlier – spied on the walk from Cape Kidnappers in early 2013, where a tractor used to ferry tourists to see the gannets at the cape came to grief as the tide came in and the front wheel fell off. A true bugger moment.

Back at the Bugger Cafe, Jutta and I enjoyed recalling that among our son Christopher’s first words in 1982 at 20 months old were “Oh Bugger”, repeated multiple and ever louder times (on video somewhere, too) as his parents fell about laughing.

The Hauraki rail trail was lovely too, despite the gates which did however lead us after a while back onto the main road – though being New Zealand, main roads other than the big single number ones are usually very pleasant to cycle. 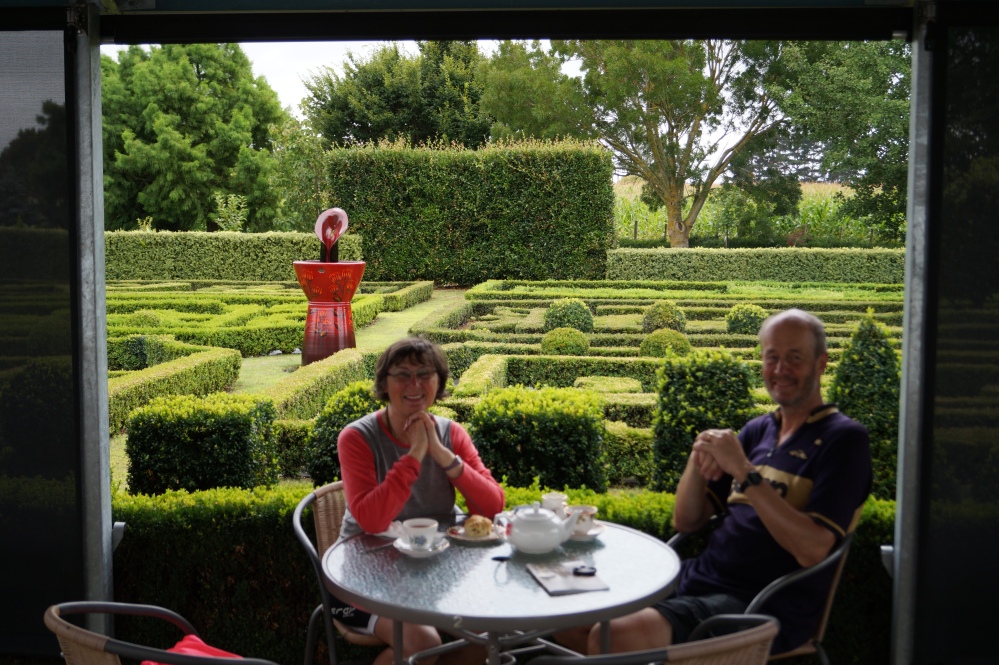 The trail brought us rather delightfully, if a little too early in the afternoon, to the Depot Garden with cream teas and the lovely English hostess Sandra, enthusiastically in New Zealand for the past 10 years after shutting up her cream teas cafe in Cornwall to move out here.

The cycling has been brilliant too. Daisy whirring away like a dream, not minding the rain, and survivable levels of Matamata-ring from the stoker on the back who says she’s actually, thoroughly, enjoying herself.

We had no internet at the Opal Park last night, so this is coming to you with thanks to the free WiFi at Matamata public library. Already gone midday, and we have serious distances still to cover. Time to get moving.