As we approach – amazingly – the end segment of our Tandem Tour of Aotearoa/New Zealand, with some  2400km behind us from Cape Reinga and only 400+ to go to Bluff in the south, some words on why Jutta and I are raising money for the Rory Peck Trust.

And with those words an encouragement to readers to dip into their pockets to sponsor us, if not already done, as we make the final push towards the 3000km mark (though we will end up a few km short of that figure) and its sister £3000 target (where we don’t at all want to end up short.)

The Rory Peck Trust is named after a famously brave and brilliant British freelance cameraman who was killed in Moscow in 1993 while reporting the attempted coup against then-President Yeltsin for the BBC and other mainstream news organisations.

Without the organisational support and the insurance of a large employer, Rory’s widow Juliet and her family were suddenly and completely adrift, financially and in so many other ways on their own.

Two years later, inspired and driven by her experiences, Juliet with a group of colleagues and friends set up the Rory Peck Trust in her husband’s memory, to provide support for the families of freelance cameramen and women.

The Trust has since grown into an international organisation that quietly and modestly offers support to all freelance newsgatherers,  financially and with a sense of being cared for, when they get into trouble, when they’re physically hurt or worse, and also increasingly now when they find themselves struggling with the emotional consequences of covering the worst things human beings can do to each other. 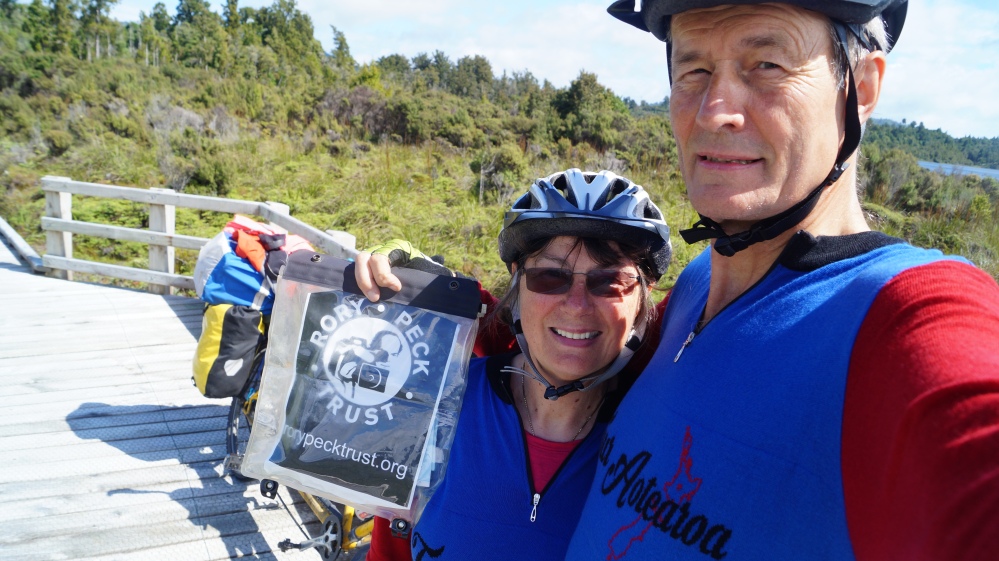 After our time with Reuters and the BBC, notably for Mark as senior BBC World Service Editor in helping set up hostile environment training and support in the late 1990s, that’s where we come in, as psychotherapists specialising in working with the impact of trauma, on ordinary folk as well as journalists.

Alongside its financial and material support for freelancers, the Rory Peck Trust has since 2014 distributed 14 grants to support colleagues in need of emotional and psychological help, and Mark is proud and pleased, as an ex-journalist and now therapist, to have been part of that network helping them get back on track.

The Trust not only supports the freelance journalists themselves, but can also help close relatives who have been affected, with grants to cover psychological assessment, treatment for PTSD and trauma, or the psychological stress of relocation/life in exile.

So, tandeming south through NZ with our RPT logo hanging from the front handlebar bag, with your help and generous support we hope to help the Trust reach out to and in turn to help ever more of those freelance journalists, fixers, cameramen and women, photographers and colleagues, local and international, who do such important work in bringing the world’s news to us.

If you haven’t already, please do give generously. The logo at the top right of each page of this blog, and the link across the top under the banner, will take you to Justgiving where it’s so easy to donate.

2 thoughts on “Why the Rory Peck Trust”