Not If, but When 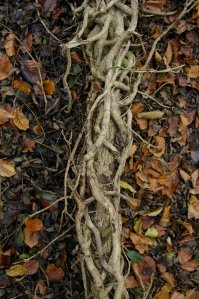 This blog template isn’t yet the most perfect – we’re beginning to write serious quantities of important thought, and it all tangles up, like the splendid and rich roots on the left, in a lot of text on the front page. But bear with us/me, as we experiment with new ways of posting an intro, with a link to more. Which, in this case, is my thoughts in response Mary-Jayne and Viola.

So – is this working…? Well, no. Still all in one block. I’ll keep trying.

Viola’s summary of the options we have is much clearer and more comprehensive than I could word it – and Mary-Jayne rightly expresses her frustration that I seem to be shouting rather than acknowledging solutions and the work that’s already been/being done.

MJ’s point about the Transition Towns work is especially well-taken, and I’ve been reading Rob Hopkins’ book this morning – and finding so much of my own Johnny-Come-Lately understanding of peak oil and climate change reflected.
(And I’m reassured that even Rob Hopkins only really began to be alarmed four years ago or so, as indeed James Lovelock himself, as I read in his new book and biography, only realised in 2004 just how desperate and urgent the likelihood of approaching cataclysm was. So while I’ve only recently come alive to the reality of this, I can now see how the alarms have also only recently seriously begun to go off even for those much longer aware. )
Very simply put, Mary-Jayne, I for my part am now certain, rather than “believing” or “fearing”, that contemporary human civilisation is heading for catastrophe at an accelerating pace – the result of climate change, peak oil, and everything else we have done as a species since the invention of agriculture and the discovery of fire 10s of thousands of years ago.
In that, I (as a complete amateur, but perhaps tuned in somewhere to an emergent collective but as yet unconscious truth) now part company in my core and articulated understanding of this from Rob Hopkins, or Jonathan Porritt, or even Jim Hansen, in framing this catastrophe still in terms of “If”.
I’m entirely with Lovelock, and his new book so bears close reading, especially towards the end where he speaks of his hope for a human intelligence that will survive this cataclysm and be able to live with love and harmony as part of Gaia.
By continuing to talk about what will happen “If” we don’t cut CO2 emissions, “If” we don’t go local, “If” we don’t do this or that, we are, in my view, avoiding the key reality that (and every piece of scientific data points that way, as we’re hearing this week from Copenhagen) disaster, and the massive loss of life and economic coherence is now programmed in.

As Tom Burke puts it powerfully on chinadialogue.net, this year with the Copenhagen talks is arguably the most important year in human history. And yet it didn’t even figure on the front pages of newspapers as we entered the New Year.

It really is like the Titanic. We ARE going to hit the iceberg. Only small numbers WILL survive.

So, imagining ourselves into that space on the liner as it steams blindly through the night, what indeed do we do?

We can talk, as Rob Hopkins does very powerfully in the Transitions context, about local economy, about alternative energy, about visions for 2030 and beyond. We can consider ship design, the salinity of the water we will shortly find ourselves pitched into, how we might survive on an ice floe… Or we could, as well at least, seriously consider the seaworthiness and stocks of the lifeboats and survival gear that we have, and prepare practically as well as emotionally for the worst.

If 90% of the world’s population/the Titanic’s passengers are going to die, and within present lifetimes, and if the whole web of the global economy which sustains and powers them is on the brink of almost total collapse (happening already, even without the environmental drivers), then even Rob’s vision in the latter parts of his book is unrealistic and out of sync with the warnings he rightly articulates in his opening chapters.

I could write much, much more, but our posts are getting quite long as it is! And I’m aware that I too, once again, am slipping into If-talk.

The truth is a) it’s not If, but When. (Just look at the Telegraph’s coverage of Copenhagen today to be reminded of the blinkeredness/idiocy of so much blog comment on this). And b), I don’t know either what we should do. As Viola says, we’ve never been here before.

In therapy-speak, it really is like personal struggle when client (perhaps someone with a terminal diagnosis) and therapist are both stuck, neither can see the way forward, and just have to stay related and connected, keep talking, and trust.

Except in this global scenario of approaching meltdown, it’s not just the client who’s got the terminal diagnosis. We all have, and that changes fundamentally how we should engage.

Mary-Jayne, I’m stuck. But I do know that this discussion of ours, in the widest sense, is incredibly important.