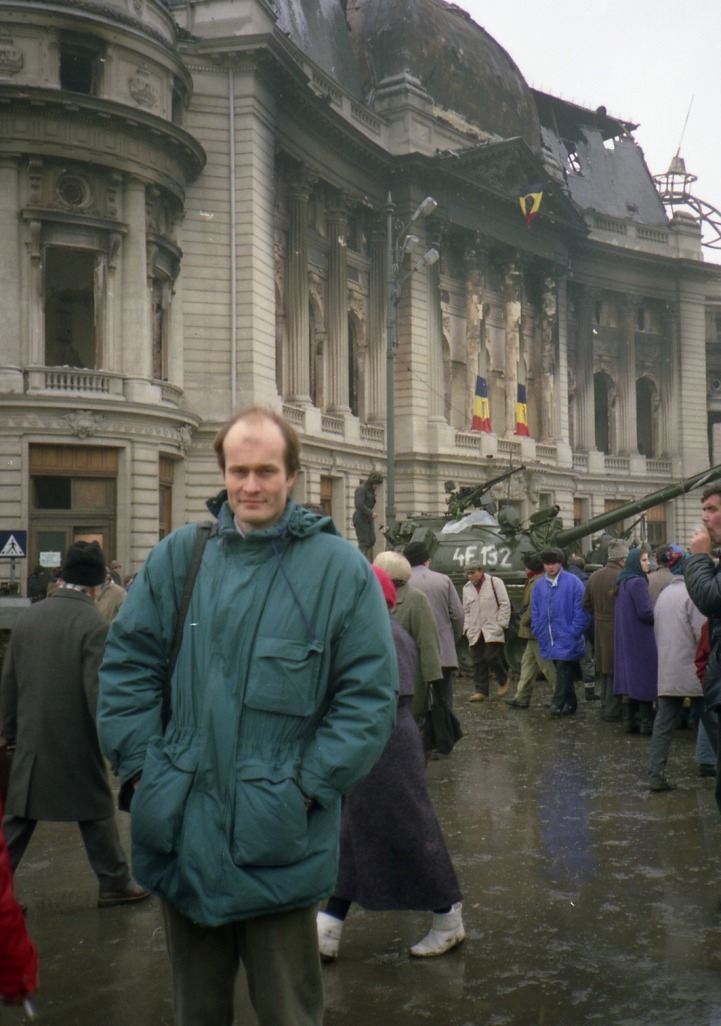 Why did I switch from journalism to psychotherapy? As chronicled (cautiously) elsewhere on this site (see my long-in-the-tooth Masters thesis from 2000), Romania and covering the revolution there 20 years ago this month were, looking back, the decisive turning point.

As this year of revolutionary anniversaries draws to a close (wall-to-wall coverage of the fall of the Wall with a capital W), I’ve been asked by the occasional student and colleague what it was like to be in Bucharest for BBC Radio at that extraordinary Christmas time in 1989.

I haven’t yet quite got the hang of this blogging software well enough to allow me to position the photos beautifully around this page, but I do at least now know how to scan old negatives into my system, so here, after months of feeding images from 40 years of travel onto my hard drive, is having a go. 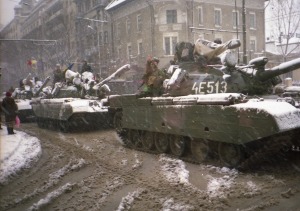 Starting on the left at the very top of this post with a view of the burned-out National Library on the edge of Revolution Square square before the old Central Committee building, where the crowds gathered to shout down the dictator Nicolae Ceausescu on that fateful Thursday and chase him away in a helicopter. He and his wife Elena were executed by firing squad on Christmas Day.

I arrived in Bucharest (by taxi from Belgrade – a fare of $1600) on the Saturday morning, December 23, just before nine o’clock London time – important, because BBC Radio 4’s Today Programme was still on air – and just squeaked into a small hotel, the Modern (which wasn’t very), where manageress Veronika Munteanu got me a telephone line to London.

I made it onto Today with minutes to go, and didn’t relinquish the line for a week. Internet? Mobile? Satellite communications? In those days, we knitted our own links to London, and treasured them dearly. 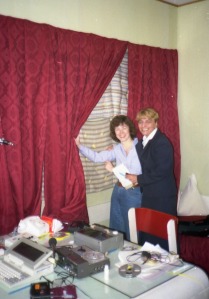 As the days progressed, Veronika (in the picture left with BBC Producer Amanda Ashton) generously allowed us, hammering in six-inch nails, to fix mattresses to our room’s walls to improve the acoustics.

Bucharest in those first post-Communist hours was a very dangerous place. Before switching sides, the army had fired on demonstrators and crushed people and objects before turning its guns on agents of the Securitate, who in turn continued resistance for three or so more days until the Ceausescus were conclusively dead.

They were euphoric, extraordinary, life-changing, unrepeatable days. Yes, the revolution turned sour when old guard Communists took over under Ion Iliescu. But whatever the disappointments, it was a real revolution. 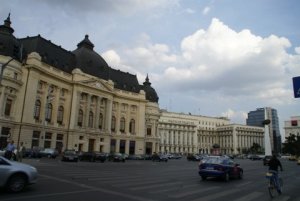 And as you can see comparing photos here, Bucharest (where my wife Sue and I began a wonderful tandeming holiday to Transsylvania this past summer) is today altogether a rather more pleasant and peaceful place.